Howell followed the 1985 ASA series with Trickle and Miller. He did some development with Fischer engines for Miller on bore/stroke ratios, rod length, and crank overall weight. And Miller was unbeatable in most of the races. “We also did some promotion of a lower level ASA series called the ‘Grand Marquis’ series using a lesser-tuned 90 degree V-6, with lots of production parts, and Chevy Celebrity bodies. We were not able to get enough teams to participate, so it was a one-year series. Many more teams switched over to Camaro body style, as Pontiac had no participation in the series,” says the engine man.

Below: Line-up of Grand Marc Cars at Winchester

Below: Line-up of Grand Marc Cars at Winchester

Chevy also continued association with the Carson team in IMSA, but switched to V-8 powered Camaro in a different category with Jack Baldwin driving. “We were also developing a turbo V-6 application with Ryan Falconer for a rear engine Corvette in a category for IMSA called Prototype. That team ended up with Rick Hendricks running it.  It was driven by ex-drag racer Danny Ongias and a South African driver,” says Bill. 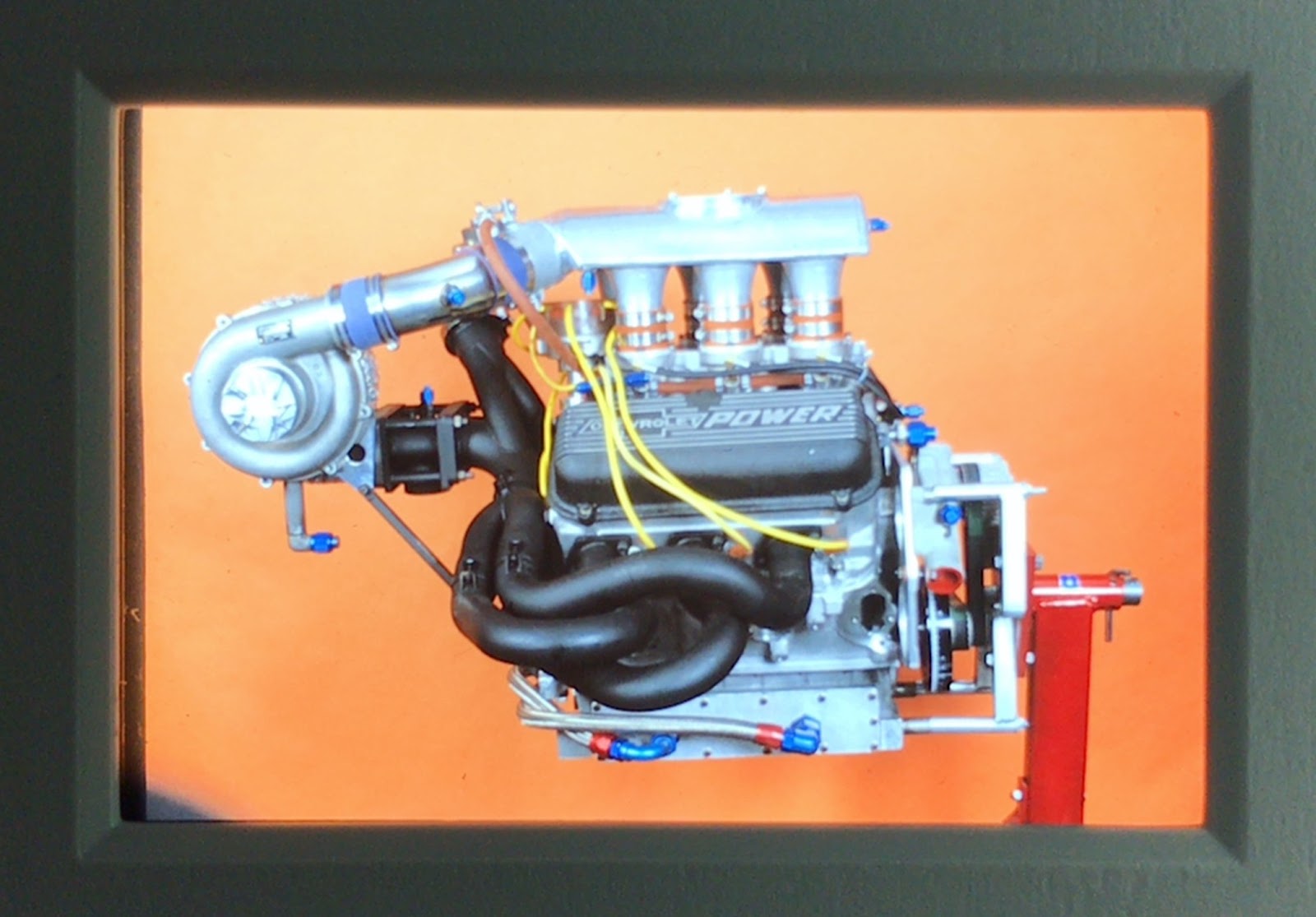 “We also developed a Turbo V-6 Indy engine for Ongias at Indy, but ended up not racing it because of oiling problems and insufficient development time. We tested after Indy and ran 200 MPH with it. Plus Bob Frey won the sprint car division of the Copper World races with Neibel’s V-6 car in January.”

Below: Ryan Falconer at work on Turbo V-6

Chevy reentered Trans-Am racing in 1986. Bill says that, “Herb persuaded the team of Selix, Riley, and Pratt who had won several championships for Ford and Jack Roush to set up shop in Wixom, Michigan and build two V-8 Camaros for TA, with engines to be contracted from Dennis Fisher in California. Drivers were Wally Dallenbach and Jim Miller (financial backer). These cars were beautifully executed except for two features Riley carried over from Roush. The cooling system plumbing design was faulty and there was too much backpressure in the dry sump scavenge system. Both errors were pointed out to Riley before the cars were ever run, but he insisted that they worked at Roush and refused to change them. Both errors cost us race wins before the season was over.  By mid year we had them build a 3rd car using V-6 power and it was introduced at the Detroit street race, driven by Greg Pickett. The V-6 car was so good that Dallenbach wanted his own before the season was over. All the engines from Fisher were outstanding.”

Dennis Fisher at his Dyno

Howell adds that as manager of the engine program, “Riley and Selix were a pain in the butt to work with.”

The 1987 Trans-Am program continued, but Howell had little to do with it. Also that year, Bob Frey won the first of four consecutive Little 500 races at Anderson, Indiana in Glen Neibel’s sprint car. Howell continued updating the editions of the Chevrolet Power catalog and attended the historic races in Laguna Seca, California.

As the mid to late 80’s set in, GM implemented a reduction in their staffing and overall workforce, and started eliminating jobs. When offered his early retirement exit from the Detroit behemoth, after 26 years of employment, Bill Howell retired from GM in September of 1987. “Chevrolet had a dynamite retirement party for me with friends from all over the US in attendance,” says the legendary engine man.

Retirement for Howell however, did not result in departing his engine expertise. Instead of tires on the ground, Bill was now helping props in the water. The following year,” says Bill, “Herb sent me to Ft. Lauderdale to look into an engine problem with a 7 liter hydroplane owned and driven by Steve David. He had recurring problems with his 465 CID MK IV engine, primarily oiling. His dry sump oiling system was improperly routed, with excessively long lines, and a terrible oil pan design too shallow due to constraints of the hull. Steve modified the hull and Herb had Pro-Motor Engr. (Chicago) build a new engine. With Reher-Morrison cylinder heads and a new oil pan, the engine was more than 150 BHP better. I also convinced Steve to run a rev-limiter to limit RPM when the boat jumped out of the water. At that time, most boat racers were afraid to use rev-limiters, as they were sure the boat would crash if it came back to the water with the activated rev-limiter. They were wrong. As part of this program, I went to hydro races at lake Wheeler, North Carolina, and Montreal, Canada helping prevent further engine failures.”