The introduction of a 229 CID Chevy V-6 in Chevelle and Monte Carlo, and a 231 CID V-6 became Buick’s only production built engine in 1978. “By design,” says Bill, “the Buick had an even firing order every 120 degrees of crank rotation. The Chevy was an Odd-fire design of 108 and 132 degrees of crank rotation. These firing orders were produced by splitting the rod journal and separating the 2 rods on it by 30 degrees (Buick) or 12 degrees (Chevy). This increased the difficulty in manufacturing a racing crankshaft and lowered the potential durability by narrowing the width of the rod bearings. Chevy had no interest in making a racing engine out of their V-6 and Buick had no choice. They no longer had a Buick V-8. In 1978 we also switched our performance engine development from McLaren Engines to a new source named Katech, started by two ex-McLaren employees John Kayl and Warren Friese, located ultimately in Clinton Township, Michigan. This gave us a more focused program which we could direct.”

Due to apparent oil shortages and major increases in the price of gasoline, GM started on a major downsizing of the fleet in 1979. “Our group started looking at performance options on V-6 engines. The 229 was not a viable candidate, but there was a 262 CID version under development (3/4 of a 350) that would be even-fire, so we started design on aluminum heads, and a box style, large plenum inlet manifold for the V-6 engines,” says Howell. 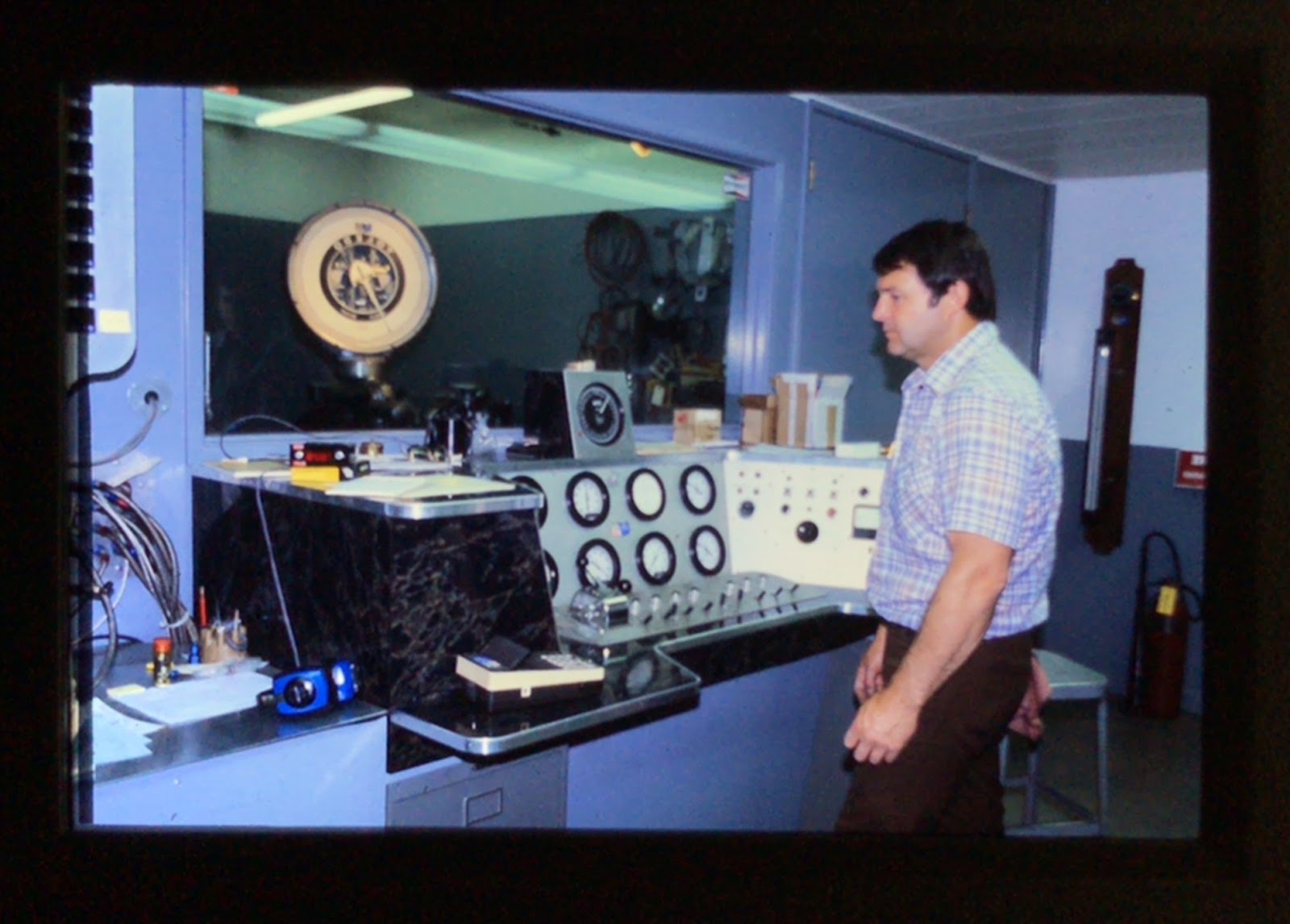 Buick was doing serious development on their V-6 as a turbocharged candidate for the 1980 Indy 500 race. Bill’s group began similar development with Ryan Falconer Engines in Salinas, California. Ryan had managed Indy engines for Galles racing at Indy. Hilborn did a fuel injection intake and system for the Chevy V-6, and a second team, Armstrong Mold out of Winchester, Indiana was also interested. IRL rules allowed 209 CID for the turbocharged version of stock block engines. These engines were too small for a full size Chevy V-8, but acceptable for a V-6.

Chevy checked into a major racing event in 1981 that had been run for several years, on the mile paved oval track at Phoenix, known as the Copper World Classic. The event consisted of 3 open wheel races, midget, sprint car, and Silver Crown cars, plus a late model stock car race. In the midget class any engine of six or less cylinders, no more than 200 cubic inches could be used. “This made our V-6 engine eligible for use,” says Bill. “Using a fuel injection manifold built for Indy turbo use, and a cast iron crank destroked to give us 200 CID, we had Katech build a suitable midget engine. Bob Higman built a new car for the engine, and entered it at Phoenix for the January race with Ken Schrader as driver. The car set a new track record, dominated and won the race, and was promptly outlawed for future Copper World races. But, we proved our point that the V-6 could be competitive and attracted the attention of Glen Neibel who ran a car in the sprint division. We then initiated a program with Neibel to equip a USAC legal sprint car with a larger (280+ CID) V-6 provided he could get a weight break from USAC, which he did. The car was entered into several events, driven by Larry Rice, with its most successful run as a second place finish in a 50-lap race on the mile dirt track at the Indy state fairgrounds. The advantage of the car was in the weight break, allowing higher turn speeds than the regular USAC cars.” 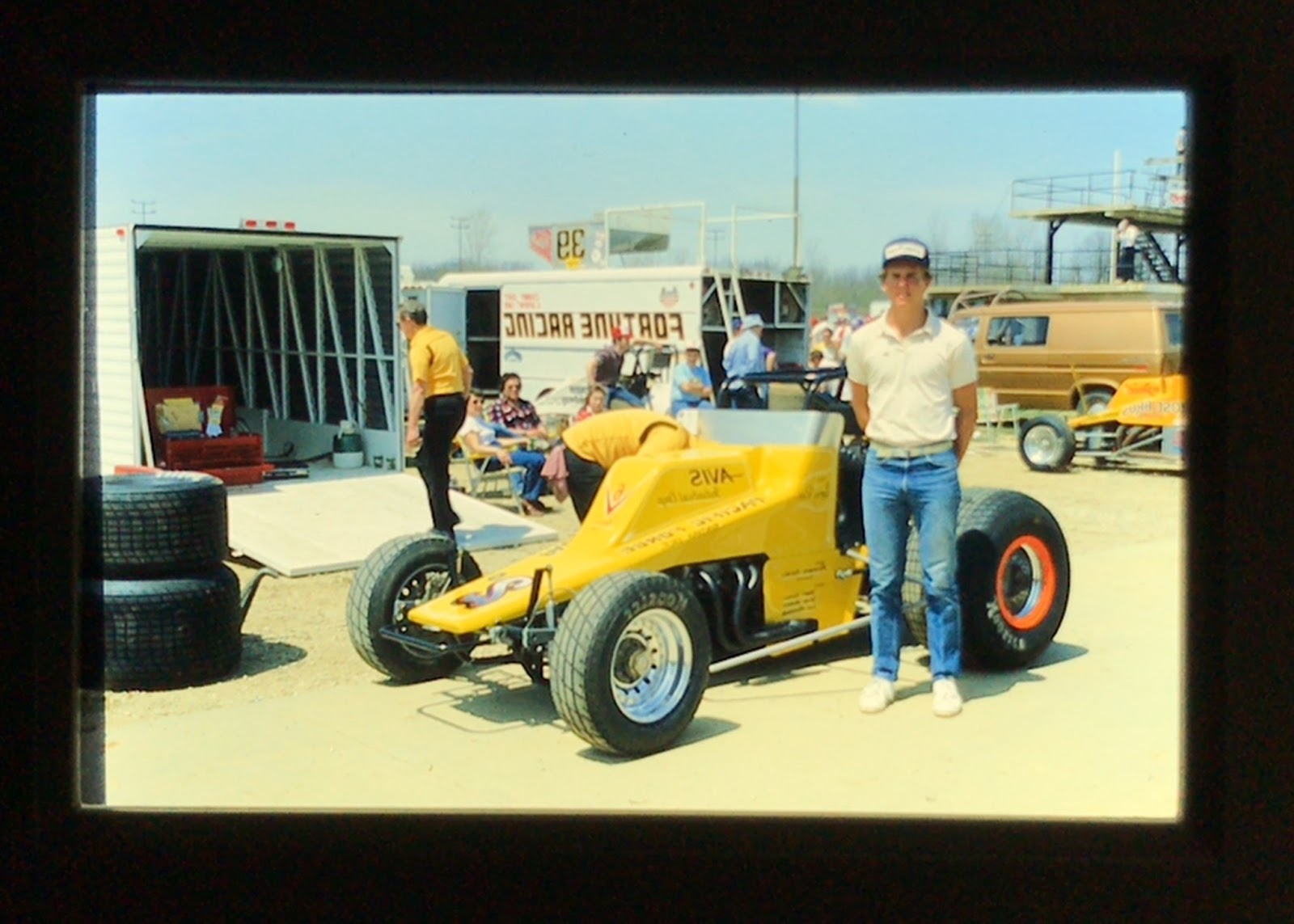 “During the year, we concentrated on development of the even fire 4.3 L V-6 for racing, focusing primarily on the cylinder head and intake manifold. We adopted the box plenum cross-ram design that was much easier to use than on a V-8, because the firing order alternates from side to side on the V-6. We also discovered that we could use the 4500 series Holley carb to advantage, along with the box manifold.”

“The Cavalier compact car was to be introduced in 1982, so we approached a stock car builder named Ray Dillon to see if he would build and campaign a Cavalier in the American Speed Association series. This would require ASA to agree to a 200 lb. weight break, which they did. We supplied a J-car body-in-white to Dillon, and Katech built the engines at 265 CID (4.3L),” says Bill. He continues that the car was competitive at several tracks, primarily ½ mile or less, winning one race at the Minnesota fair grounds, driven by Butch Lindley. The car was also driven several times by Pancho Carter. Ultimately, ASA decided not to let the V-6 continue beyond 1981, due to the extra cost to their owners to use both V-6 and V-8 engines.  Plus, neither Ford nor Chrysler had a competitive V-6.

By 1982, ASA and other Midwest stock car circuits had begun limiting the compression ratio of their engines to 9:1, in an attempt to increase engine life. There was much concern that there was no foolproof way to verify the engine CR without disassembly of the engines. Howell says that, “In January, we got a call from the promoter at New Smyrna, Florida, wanting to borrow a device used by GM to measure compression ratio without engine disassembly. It induces air to the combustion chamber with the piston at top dead center, through the spark plug hole, and creates a sound that can be measured in frequency to determine the volume. GM was not willing to loan their device, but I was able to locate a cruder portable device that lab technician, Ken Sperry had developed. I arranged to send it to New Smyrna and went there during Daytona speed weeks to demonstrate it. Later, with demonstration in several engines of different CRs we proved the accuracy of the device. In the summer, Katech and I approached the ASA to see if they would finance development of a more sophisticated device that would be easier to use, and could be marketed as THE WHISTLER. This device has proved its utility and several hundred have been manufactured and sold to racing tracks and teams all across America.” At first NASCAR opposed the device, as they thought their competitors could probably cheat it, however, now they also use it.

“We also continued serious development at Katech on the 4.3L V-6,” says Bill.  “While investigating a main bearing wear problem, we discovered an improvement in the transfer of oil flow from the main oil galleries to the connecting rods, via the main bearing oil supply. We relayed this information to the 2.8L V-6 engine group who used it to solve one of their problems, and it was also incorporated in the V-8 LS series of engines when they were designed.”

“We also discovered we could go to a complete odd-fire configuration on the 90 degree V-6, allowing us to run regular V-8 connecting rods side by side on a common rod journal. This gave us a firing sequence of 90-150 degrees allowing us to manufacture billet and steel forged crankshafts for increased performance and durability. Thanks to Moldex Crankshaft Co for this,” say Howell.

“In 1982, we sponsored a team in the IMSA Kelly American series of road racing. The team was owned by Bob Carson and the car driven by Craig Carter. The car was a 1982 Camaro. Using Katech-built V-6 engines, we were able to capture the series championships for 3 consecutive years, 82-84. Also in ‘82, Bob Frey in Glen Neibel’s sprint car, won the sprint portion of the Copper World Classic in January.”

Howell says, “We solved a recurring cylinder head gasket leakage problem on the Small Block V-8 with a new head gasket incorporating a steel O-ring inside the armor around each cylinder bore opening. We cooperated with Fel-Pro Company on this, as they were the manufacturer of choice on the head gasket developed for the Oldsmobile diesel engine in 1980.  This had been a major problem in NASCAR and other high load series.  Acceptance of the new gasket was difficult until Wadell Wilson, DiGard’s engine builder chose to use it.”

Due to the NASCAR team’s reluctance to adopt the Monte Carlo body style, GM decided to design an aerodynamic nose for the car and a new nose configuration was designed and tested in the GM wind tunnel at full size in 1982. “Through an arrangement with DiGard, they built a car that could run either nose and we tested it at Talladega speedway,” says Howell. “The new nose was worth about 8 MPH in top speed, and it was decided to incorporate it as a Monte Carlo option in 1983. A build of 6,000 cars was scheduled with two body colors and one interior color. It was a great success on the racetrack and in the dealerships. Many more than 6,000 were sold. This sequence of events convinced GM management that brand image around racing was significant. 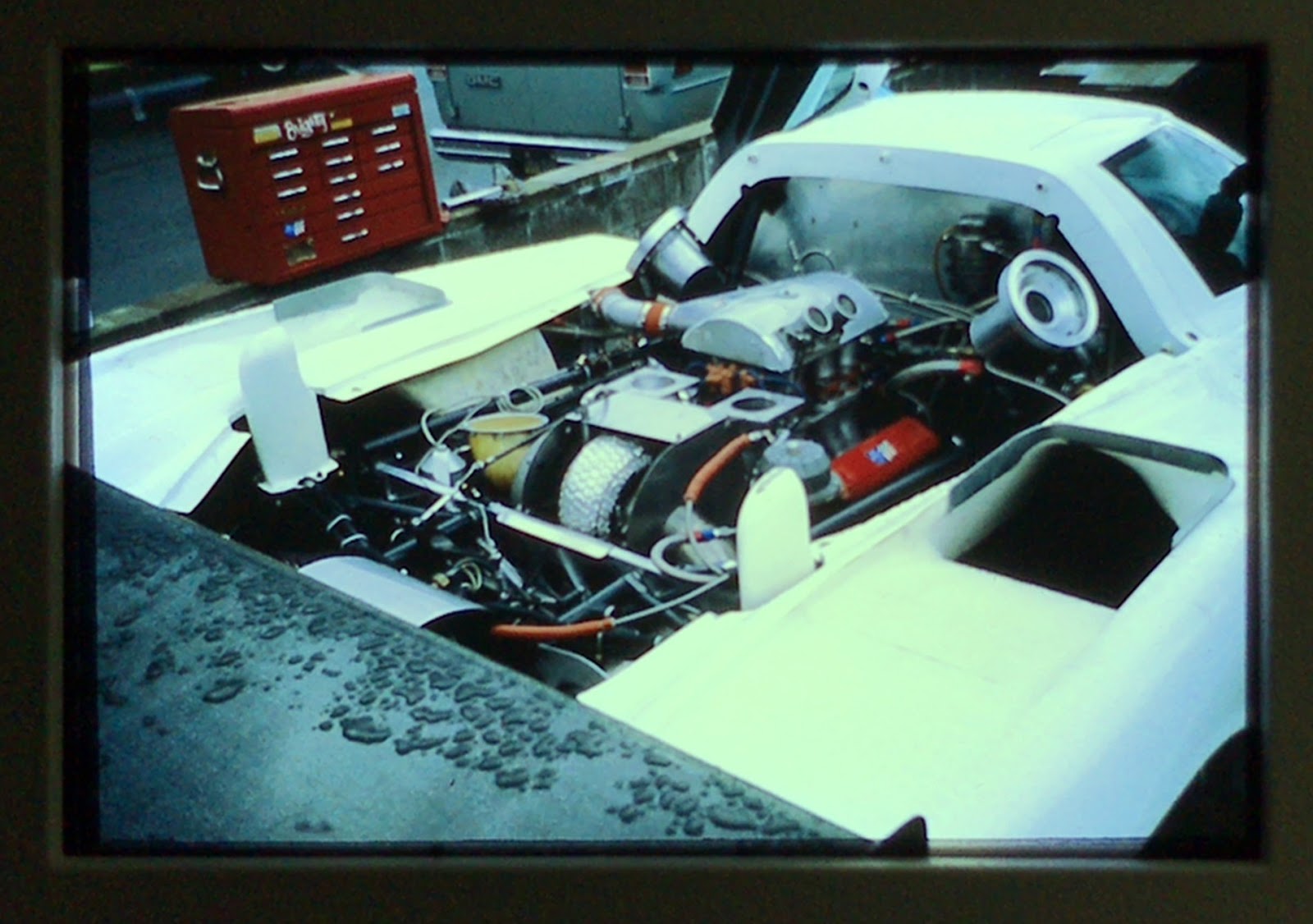 In 1983, a number of NASCAR teams switched to Monte Carlo. “To my knowledge,” says Bill, “we were not supporting any of them with parts or money. We continued in road racing (Kelly series) and won the championship. Vince Piggins retired during the year, and Herb Fishel was moved from Buick back to Chevy to run the performance departments. We were doing some turbo V-6 for Corvette prototype racing, and naturally aspirated 2.8L V-6 development with Ryan Falconer for off road truck racing.  I coordinated this on trips to California. We also started developing a turbo V-6 Indy engine at 209 CID with Ryan using new aluminum block and head castings.”

By the mid 80’s, the American Speed Association competitors had been using Pontiac Firebird body styles as their body of choice due to a lower and more streamlined nose configuration, even though they were all running Chevy engines. Herb contacted Dick Trickle in 1984, and Howell contacted Butch Miller teams to see if they would switch to Camaro body style if Chevy picked up their engine costs. They were agreeable. Trickle was using engines from a Chicago builder (Ron Neal, Prototype Engines), and Miller from Grand Rapids, Michigan.

Howell says, “We switched Miller over to Dennis Fischer, from California. Needless to say, they both continued winning as before. Both teams ran ARTGO races as well as ASA.  This gave us a familiarity with Fischer as a new builder. We also decided to support a 1984 Indy Car program with AJ Foyt to run a Falconer-built turbo V-6 209 CID engine at the Indy 500. We ran into ignition problems, and crankshaft unbalance problems that terminated our program before the first qualifying day. Johnny Rutherford was the selected driver. The crank problem turned out to be caused by the distribution of counterbalance weights on the V-6 crank, which had also been affecting our naturally aspirated race engines. By adding counterweights to the center throws of the crank, we cured a condition that overloaded the second and third main bearings in the engine at high speeds. Thanks to Moldex Crankshaft Co for this fix, he welded up a test crank to prove the principal. Sherman Armstrong in Winchester also attempted to run Indy with a turbo V-6 that they developed. Greg Leffler was their driver. We won the Kelly American series again, too.”